While looking for some obscure factoid, I came across an issue of Nation’s Business, an organ of the U. S. Chamber of Commerce. It began as a newspaper in 1912, and every issue of the long-running business magazine published between 1914 and its last issue in 1999 can be found on Archive.org, each scanned in its entirety.

There’s a lot of manly industrialist dynamism captured in many of the covers, but I especially like the covers from 1929, which seem mostly to be by one artist, or at least several artists using a similar style. Magazine cover art is rarely signed, but I was able to make out at least one signature (on the cover above): Louis Fancher. a fairly prominent artist of the time. It’s unfortunate that most commercial artists and illustrators — whose work has helped to shape our vision of historic times and places — have, sadly, gone unheralded. 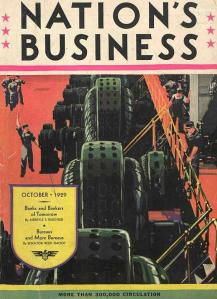