Above, an illustration of an air raid shelter which was under construction in Wimbledon in 1939 at about the time that Great Britain declared war on Germany (see this image larger here). The illustration appeared in the September 18, 1939 issue of Life magazine — just two weeks after Britain entered the war — with the following caption:

A de luxe shelter now being built at Wimbledon with servant quarters is fitted for 25 persons. Reinforced with 400 tons of concrete, its curved top might even deflect a direct hit. It is entered through three splinter-&-gasproof doors and two airlocks where clothing may be decontaminated. Air duct and pump clean air, keep inside pressure up, gas out.

Servants’ quarters! Not only are there servants — in uniform — but the occupants/guests appear to be in evening dress. If you’re going to have to spend time in an air raid shelter, you might as well do it in style, I guess.

Britain was a prime target for German air raids, and it became a regular occurrence for city dwellers to take refuge in one of the public shelters (the underground subways in London, for instance) or for families (with pets in tow) to head for their backyard shelters when the sirens blared, remaining in place until the all-clear was sounded.

An illustration showing the basement of a home fitted out as a shelter (click to see a larger image): 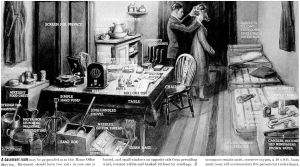 And a public shelter:

It’s hard to imagine the stress and constant terror people in war-ravaged places must be under every day, all day long. In England, during the days of the Blitz, air raid shelters saved many lives, as the photo below shows: the Anderson shelters (which were constructed half-below and half-above ground) can be seen intact amongst the rubble. (Click to see a larger image.)

Below are excerpts from three British Pathé newsreels/PSAs intended to help the British people learn to protect themselves from bombs, shrapnel, flying debris, and gas attacks.

The three drawings are from the Sept. 18, 1939 issue of Life magazine. More can be seen in the several pages of the article, here. (Click magazine cover below to read Life’s coverage of the very first days of the brand new war — the Table of Contents has hyperlinks to the individual articles.)

A stunning collection of photographs showing the personal back-garden Anderson shelters which dotted the British landscape can be seen in the Retronaut article “1939-1944: Backyard Bunkers of the Blitz,” via Mashable, here. (The photo above which shows the post-bombing rubble-filled neighborhood is from this Mashable page.)

Most images in this post are larger when clicked.

One thought on “WWII Air Raid Shelters, Deluxe and Otherwise — 1939”