Baby Ruth-branded chewing gum? I don’t know. There’s a built-in, involuntary “ick” factor with that — it’s hard to not think about that unpleasant sensation every child has experienced when attempting to follow a mouthful of peanuts or chocolate with a stick of gum. I’m sure no one expected this gum to be packed with peanuts, but I’m sure there were lots of people who expected that it would at least taste like a Baby Ruth candy bar. It didn’t. It was minty. It was super-charged with strong, long-lasting “old-time peppermint flavor.” The tagline: “You can’t chew out the flavor.” I’m not sure whether that was a challenge, a promise, or a warning.

The gum was the brain-child of Otto Y. Schnering, the president of the Curtiss Candy Co. and the man who created the still-wildly popular Baby Ruth and Butterfinger candy bars.

His Baby Ruth gum hit the market in 1928 with a major advertising blitz, including the brilliant stunt of going from town to town and tossing the new product out of a circling biplane: each package of gum (and sometimes a candy bar) was attached to its own little parachute, and hundreds (if not thousands) at a time floated down to the waiting hands of eager children. This followed ads in the previous day’s newspapers which would no doubt cause every child in town to rapturously daydream of “candy showers” and be awake before dawn eyeing the sky for falling sweets. This clever promotion was a hit, and salesman/pilot Dallas M. Speer became something of a minor celebrity himself. 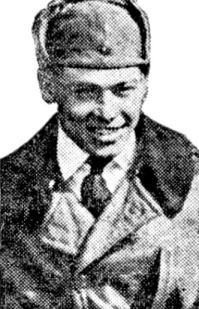 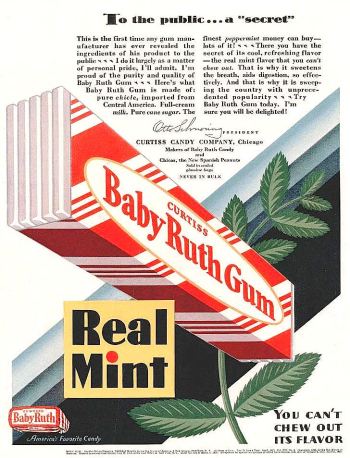 Before the chewing gum promotion, Baby Ruth candy bars were dropped out of airplanes in 1925. It’s always worth bringing back a popular stunt. (All images are larger when clicked.) 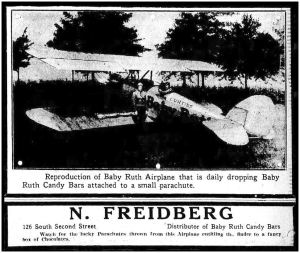 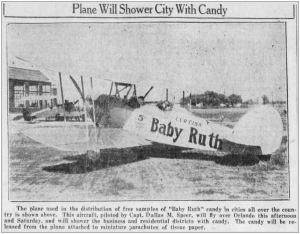 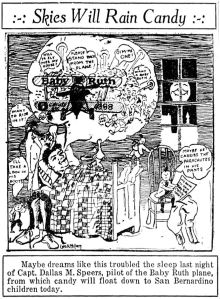 Color ads: I’m unsure of the source of the first ad, but the second ad is from the April, 1929 issue of Boys’ Life.

More on the Curtiss Candy Co. at Wikipedia, here.

Read an illustrated, everything-you-could-ever-want-to-know article about Otto Schnering and his Curtiss Candy Co. from the Made in Chicago website, here.